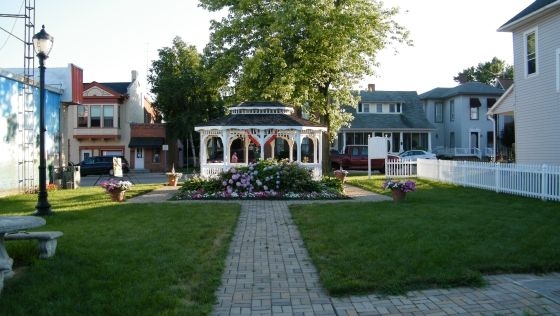 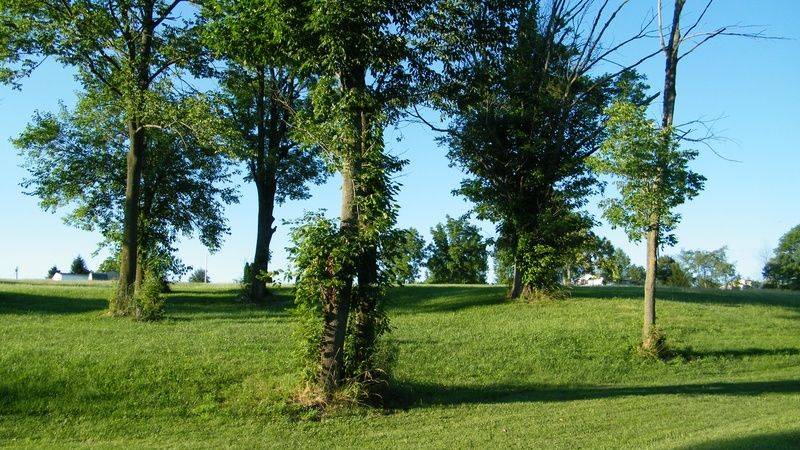 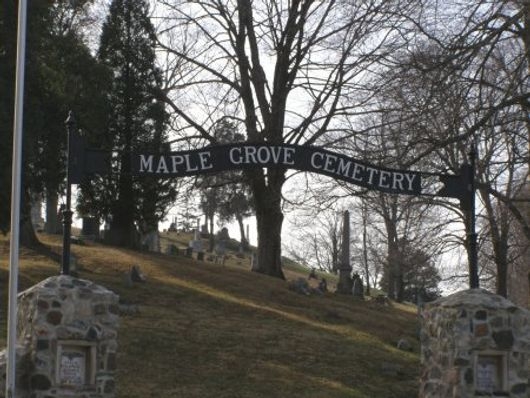 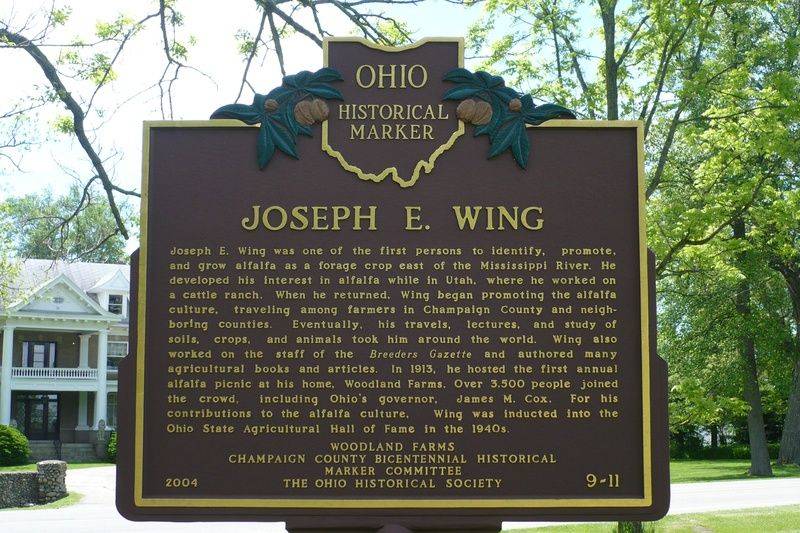 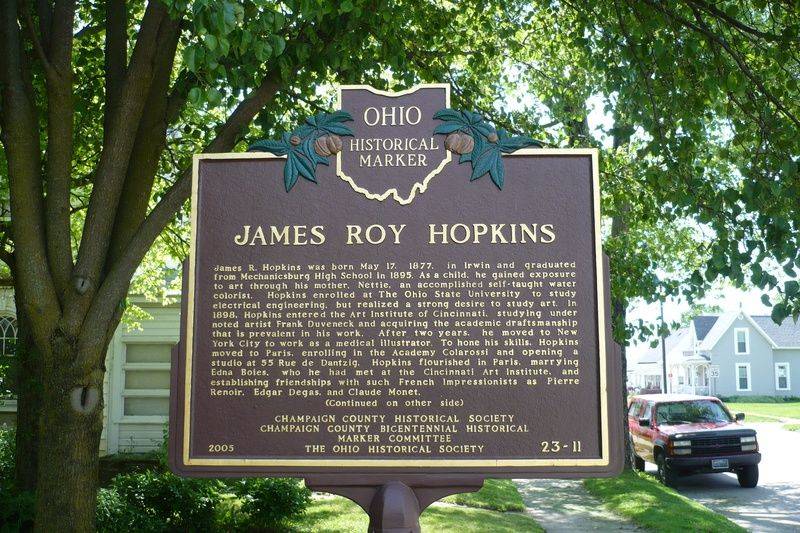 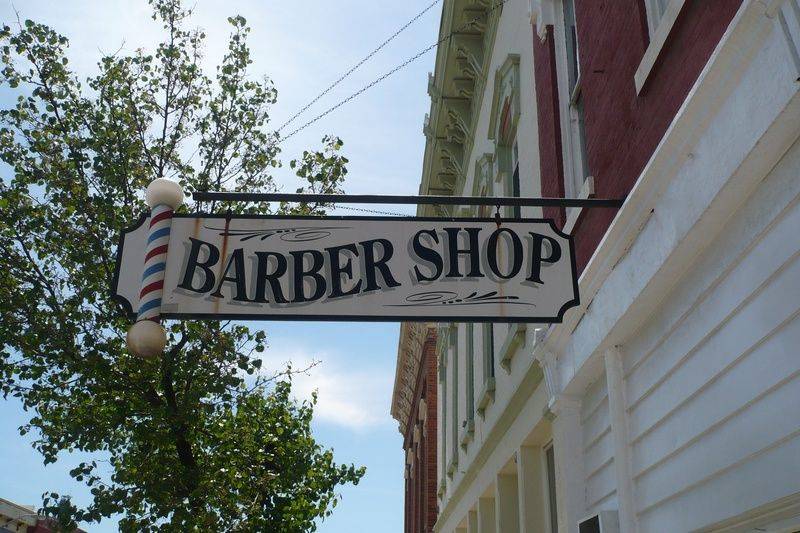 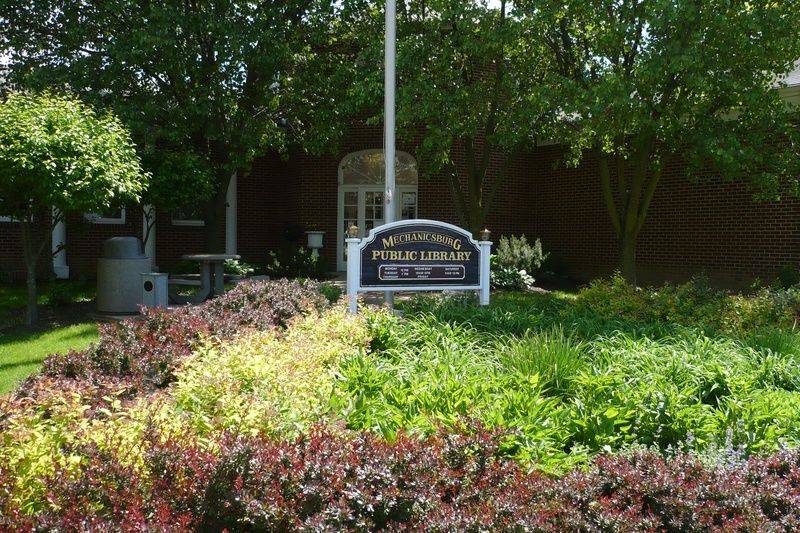 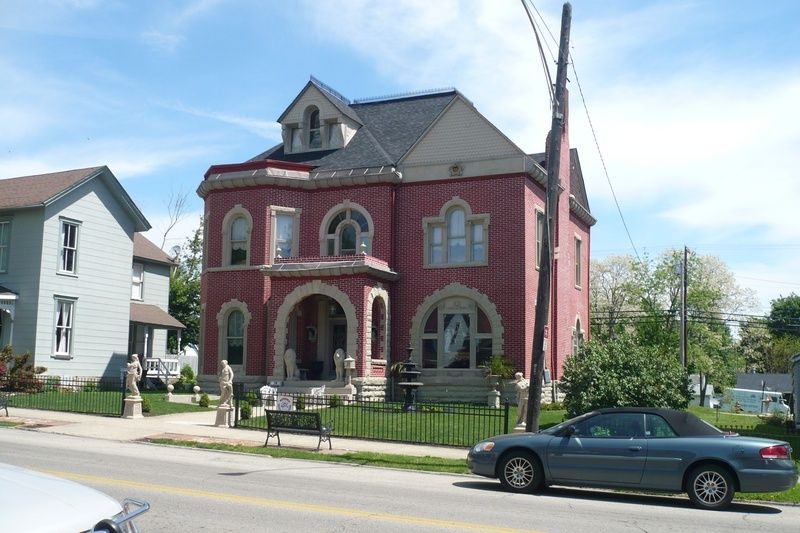 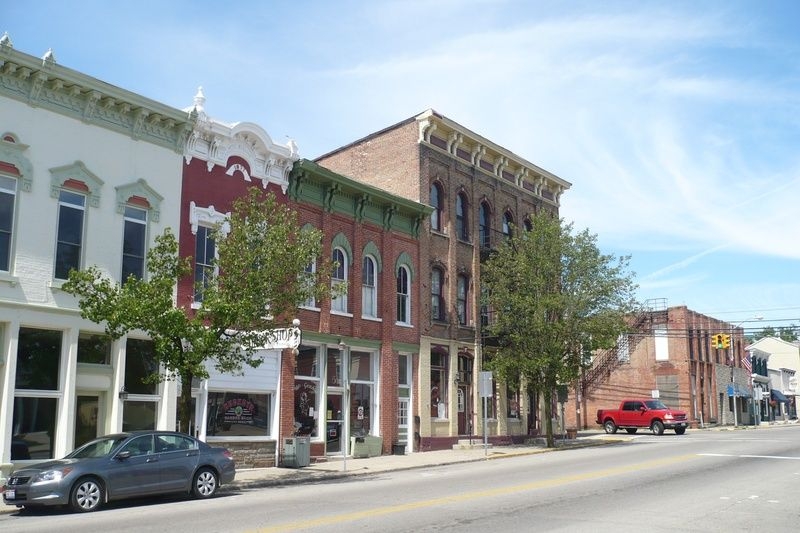 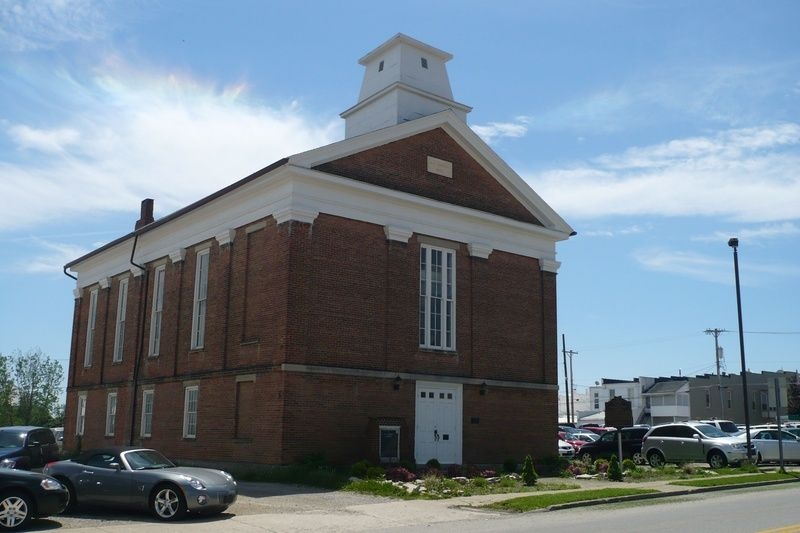 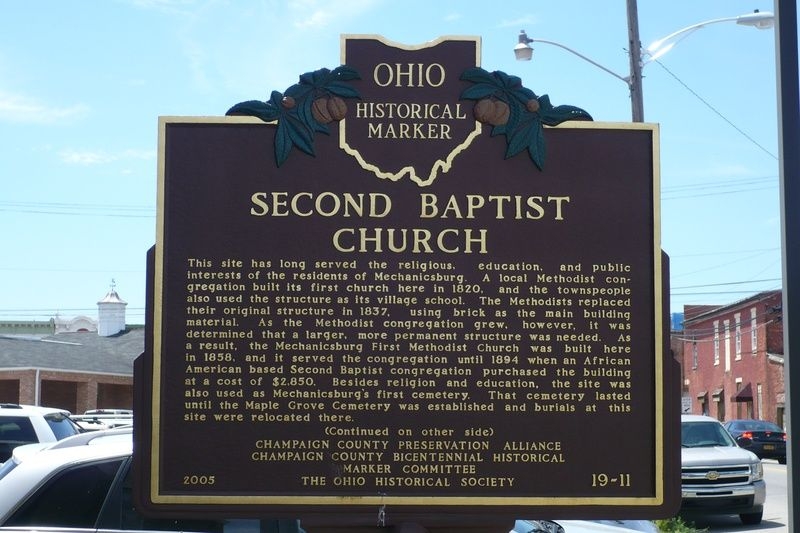 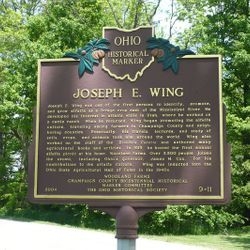 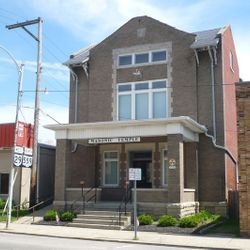 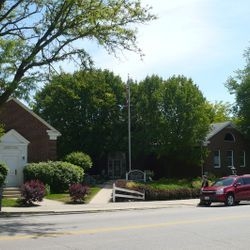 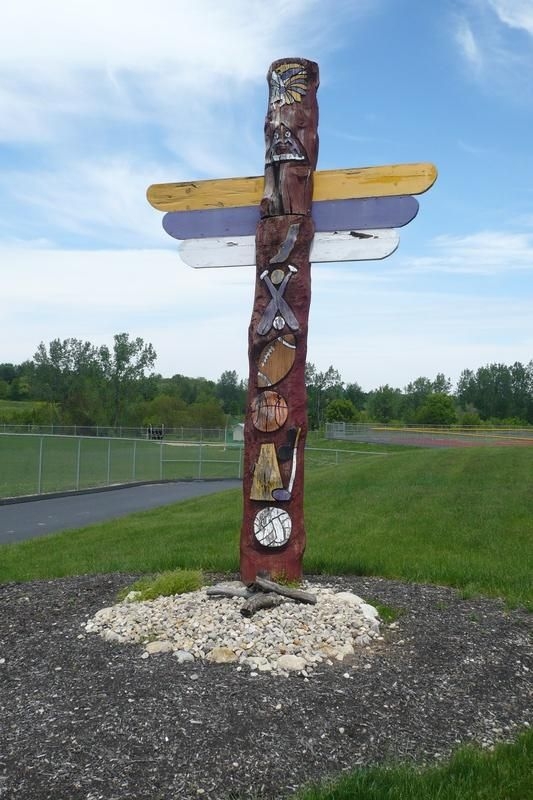 The land where Mechancisburg stands today was occupied in prehistoric times by the Mound Builders, and later by the Shawnee. This area of the Northwest Territory was part of the Virginia Military District, so many early settlers came here from Virginia to claim parcels awarded to them for service.

In the spring of 1811, General Hull marched his army through the southwest part of Ohio, establishing forts and military roads on their way to Detroit, where the War of 1812 was brewing. According to Joseph Ware's 1917 History of Mechanicsburg, two soldiers in Hull's army became acquainted with members of the Shawnee tribe living along the Dabra (now called Darby Creek) and decided that they'd return to the area after their army service was done.

Ware's account says that John Kain and the chief mechanic of the expedition, Captain Culver met Chief Ohito and his daughter, Wawanita, and soon Captain Culver and the Shawnee princess had fallen in love. As Hull's army prepared to move on to Detroit, Culver and Kain vowed to return to the banks of the Dabra after the war. Legend has it that Wawanita agreed to wait for her mechanic.

After Hull's defeat in the War of 1812, the two discharged soldiers did return with plans for settling in the area planning a town, and, in Culver's case, settling down with the lovely Wawanita. Ware says that although the Shawnee village had been moved, the chief's daughter often returned to the place to watch for her soldier and one day they were reunited.

Thus it was on August 14th, 1814, in the unbroken forest along the banks of the Darby that Captain Culver, at the request of John Kain, laid out the plat for a new town with 28 in-lots and 16 out-lots. Culver and Kain called in Wawanita to suggest a name for the town. She suggested "Mechanic", her first English word. They immediately added 'Burg' and the new town of Mechanicsburg was born. The place where Chief Ohito's teepee had stood became the site of a log cabin built by John Owen, who operated a general store and bank here. Later, the same site held the Darby Hotel, and also housed the Anderson Inn. In 2002, a portion of the old hotel was renovated and restored and is now the site of "Beans and Cream" coffee shop. At the top of the hill, alone the army's path to Fort Urbana, Kain built a double cabin for himself. The lot is where the Finkle residence now stands. New settlers were drawn by Darby Creek and Mill Run, which furnished power for the grist and lumber mill.

Mechanicsburg became a hub for railroad commerce in the 1850’s, with farmers and manufacturers shipping products over the entire country. Well before that the Underground Railroad was active in the area, as antislavery sympathizers helped fugitive slaves escape to freedom. One of those fugitives, Addison White, played an important role in the history of Mechanicsburg when U. S. Marshals rode up from Cincinnati to arrest him and take him back to his “owner” in Kentucky. Mechanicsburg citizens rallied, armed with weapons of all sorts, and turned the posse back. They took up a collection to reimburse the slave owner, thus buying Addison White’s freedom. In return, White decided to settle in Mechanicsburg. The Addison White case received national attention in the newspapers and was a factor in bringing about the Civil War.

Addison White fought with the 54th Regiment, Massachusetts Infantry, the regiment portrayed in the movie Glory. After the war, he returned to Mechanicsburg to marry. Addison and his wife, Amanda, are buried in Mechanicsburg’s Maple Grove Cemetery (Section B, Lots 2 & 3).

With the growth of industry and agriculture after the War, Mechanicsburg’s Goshen Park became the site of the Central Ohio Fair, an association formed in 1868, joining Champaign, Clark, Union and Madison Counties in an effort to promote and celebrate agricultural achievements. The Central Ohio Fair expanded to include Logan, Greene, Delaware and Franklin Counties in 1878 and was the forerunner of today’s Ohio State Fair. In-fighting and economic decline led to the dissolution of the association after 18 years and the last Central Ohio Fair was held in 1896, in what is known today as Goshen Township Memorial Park.

At the turn of the century, culture and entertainment came to Mechanicsburg with the annual Chautauqua, summer circuits of lectures and music in the park. Around 1910 it became known as Matinee Park where many exciting trotting and pacing races were held. Famed speakers such as Mark Twain, Billy Sunday and William Jennings Bryan traveled the Chautauqua circuits, giving rural Americans the chance to hear from the outside world in the days before radio, TV, and the internet.

With the advent of radio, the Chautauqua soon became less popular, and hard economic times brought an end to the big horse racing events. During the 30’s and 40’s the center of the old race track was plowed up for “Victory Gardens” and the rest of the park was neglected.

In 1944, with veterans returning from the war, about 125 citizens decided to take on the renovation of the park. The 26-acre parcel was turned over to the Goshen Township Trustees and the park officially became the Goshen Township Memorial Park, dedicated to the memory of local soldiers. With continued support from the Village, the park has been improved with shelter houses, a community building, ball diamonds, and beautiful Christmas light displays. Goshen Township Memorial Park has again become a center for outdoor community and family events.

Today’s Mechanicsburg has maintained an old-fashioned small-town lifestyle, while a downtown renovation/restoration project guided by Our Towne – Mechanicsburg (previously known as Main Street - Mechanicsburg) is dedicated to preserving historic architecture and National Historic Landmarks, while drawing new businesses and services to the village. Where livery stables and blacksmith shops once flourished, auto dealerships now grow and gift shops, antique shops, and boutiques fill the spaces once occupied by tinsmiths, harness-makers, and millinery shops. The public library, founded in 1934, now provides not only books and magazines, but videos, CD’s, DVD’s software, and a high-speed Internet connection to their computers for public use.

The population of the village proper has decreased to 1,744, according to the 2000 census, yet more and more families are moving to the area seeking a simpler way of life in a quiet community with old-fashioned values. The task for today’s leaders in the village affectionately called “The Burg” involves an often difficult balancing act: maintaining that old-fashioned simplicity and comfort level that today’s families expect, and at the same time provide up-to-date support services, well-funded schools, and trained fire and safety personnel. There are no magic bullets and no quick fixes, but those who value quality small town life continue to struggle toward workable solutions and hope for a brighter future for Mechanicsburg.

History as provided by the Mechanicsburg Public Library.